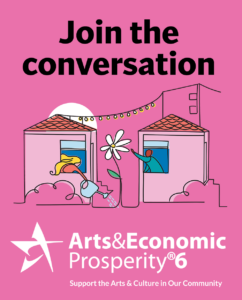 While you’re at the PAC, don’t forget to join the conversation!

Through April of 2023, we’re measuring the impact of non-profit arts and cultural institutions in Lincoln County, as part of Americans for the Arts’ Arts & Economic Prosperity Study 6—the nation’s largest, most comprehensive study of the Arts & Culture sector…and you can help! When you attend this event, please complete an “AEP6” survey before you leave the building (and every time you attend an event or exhibit at the PAC). 3 minutes, 13 questions, totally anonymous. Look for the iPads located in the lobby, or ask an usher for a paper copy.

To learn more about this incredible study, and what makes it so important, click here.